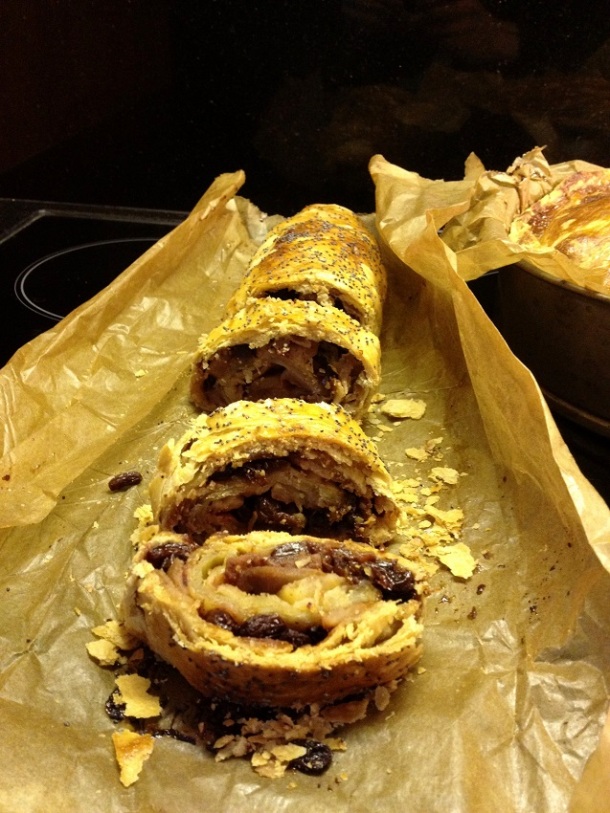 Today, I’ll give you a 100% natural quickest and easiest recipe for a apple pie and a Viennese délicatesse (delicacy) adapted to a no-sugar recipe with the dough leftovers of the pie crust.
The ingredients are so basic you can find them in every country possible!
I love to peel the apples in big quantity so I can make apple sauce at the same time, with only cinnamon and a little water (cinnamon brings out further their sweetness). I use the Boskoop apple which originates from Holland because of its strong sweetness which gives me the possibility to bake or cook without sugar and no complaints from family members. (It was so successful this time, I got two of them “ordering” it for their birthdays 🙂 )
Besides, there are so big it’s much easier to peel a big amount that way!
Just use the sweetest in your country.

The easiest crust on earth!
©copyright2013owpp

For the ones who believe in Yin and Yang balance, you could add a pinch of salt.
I stir it with a spoon, it takes 1-2 mn. 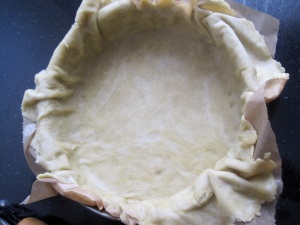 Cinnamon
Boskoop apples (you can use a lot like I do or a little, it’s a matter of taste)
Raisins 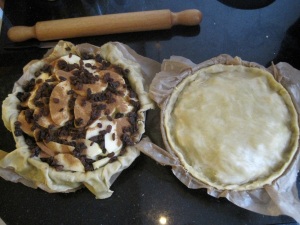 Divide the dough in four (two for each pie)
Roll out the dough on a baking sheet quite thinly and put it in a round baking tin, it could be deep, shallow. You could want a big oven square tray or as I did this time as an exception, two smaller, deeper round ones which gave me the opportunity to do with the dough leftovers a bigger Viennese apple Strudel.

Sprinkle generously cinnamon on it, then the raisins, add as many apples as you want ( I use a lot but some might prefer less) Sprinkle again generously with cinnamon, add raisins and roll out the second piece of dough on a baking sheet, turn it upside down covering the pie (the paper visible to your eyes and dough invisible) then peel off the paper and stick the borders together cut the dough all around (those are your leftovers for the Viennese apple strudel) then, brush the dough with an egg or if you don’t use them as I, take rice syrup add a little water and brush gently.

Take all the bits of dough left, roll it out thin on baking paper then sprinkle generously with cinnamon (yes, just repeat the same gestures 🙂 ) add the raisins and apples in smaller pieces so it rolls easier and roll it. Leave it on the paper, gloss it with the rice syrup or egg, sprinkle with sesame seeds, poppy seeds or with nothing… And just pop it in the oven with the rest.
For those who use sugar you could add some everywhere with the apples. The Viennese strudel could be decorated after the baking, in the traditional way with icing sugar which makes it look quite appetizing!

I hope you enjoyed this recipe and find it easy enough to try it out on your own. Just let me know what were your impressions 🙂