Happy 3rd Anniversary with WordPress.com. Thank you for all your support! 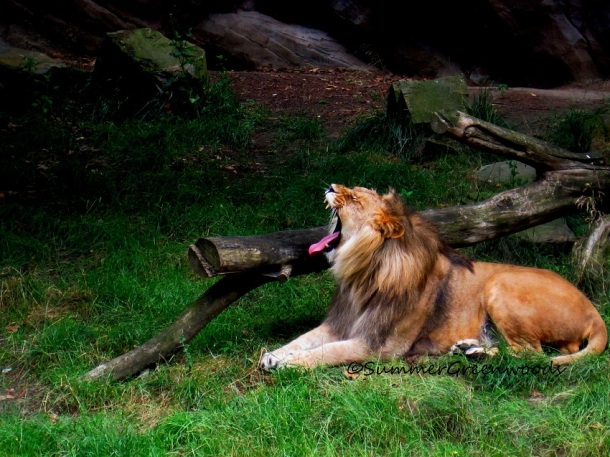 Roaring at the top of my lungs!

This is what I got today in my notification! Time just flies by, I can’t believe I am among the oldies 😉
I want to take this opportunity to express my gratitude to all of you faithful, patient, kind followers!
Much appreciation for all the above & more…

Happy Anniversary with WordPress.com!
You registered on WordPress.com 3 years ago!
Thanks for flying with us. Keep up the good blogging!

I was so proud of a success never matched before in my home grown projects, the cucumbers came out relatively huge… that is until I got this very important information, which was like my balloon being pricked, nevertheless I am going on having a load of fun seeing it grow!
I have included a one mn video showing how to get rid of the poison. Personally, I’d rather not touch it. I rarely eat cucumber as I follow the guidelines of macrobiotic eating & it’s a nightshade(*see correction in comment) vegetable which means a big no-no. 🙂
I call my other plants a challenge as they are warm climate ones which I have to keep indoors all year round for the first two yrs then for many winter months.
A very gratifying experience. I always get a kick out of a good (positive obviously!) challenge.
Not many survive. I start off with a whole load then, left with one or two. Keep scrolling down to see my “exotic” plants 🙂
Out of precaution I kept my plants in a protected part of the balcony which is partially closed.
I wasn’t going to take any chances 😉

Have a great weekend!

Here’s the news I received…

“A 79-year-old German died after eating a home-grown zucchini. In the vegetable (probably one created by the plant itself) was poison. That poison can cause death in very rare cases.
The man and his wife were seriously ill after their meal. They were taken to hospital. The woman recovered, but the man continued to deteriorate and eventually died. The culprit is the substance cucurbitacine. Which was formerly naturally in courgettes and cucumbers to prevent animals from eating the vegetable. Growers have the past centuries with breeding programs managed to take away the poison. If people grow vegetables, it can still crop up. The advice is therefore (to home-grown courgettes) first to eat a raw piece. If the vegetables taste much more bitter than usual, then this are indicative of cucurbitacine. This also applies to pumpkins.”

Published on 27 Nov 2012
Cucumbers naturally can produce chemicals called cucurbitacins which causes the cucumber to be bitter. In large quantities, this chemical can make a person sick.

Did you know that?

And here I thought a cucumber was just a harmless vegetable.
I learned this method of reducing the bitterness from my mom.
The kids found this exercise rather amusing :).
Category
Science & Technology
Licence
Standard YouTube Licence 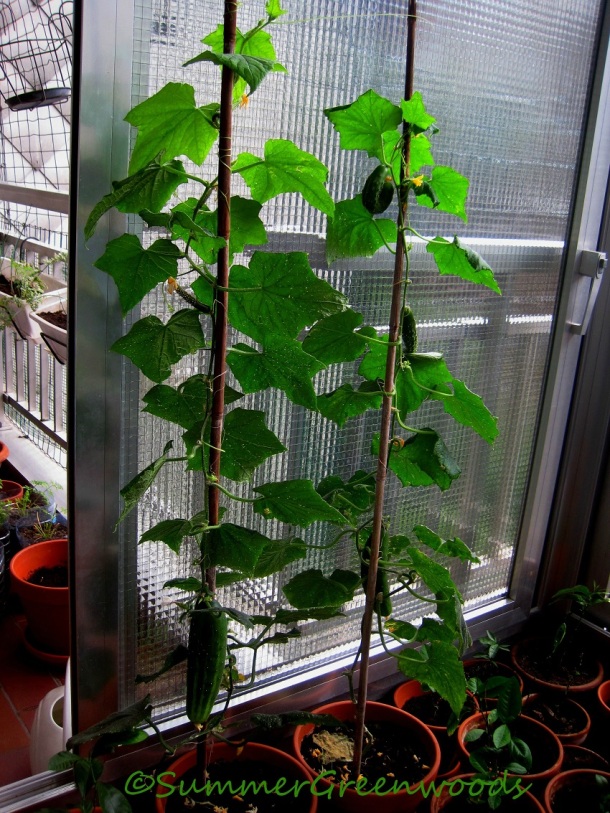 See all those cucumber sprouting everywhere?

My beautiful Litchi plant! That’s a very difficult one…

So proud of my Kiwi tree which nearly died winter, had it wrapped up in a huge plastic bottle indoors as a greenhouse!

A close up… See the huge leaves?

My accidental date baby tree. I had thrown a pit in the earth & totally forgot about it… A beautiful summer surprise!

A citrus tree. Out of all of them this is the only one truly picking up 🙂


Beautiful documentary well worth the time to watch!I have restricted my video posts as they take up too much space on the blog but make exceptions for the exceptions 😉
Wishing all of you faithful followers, the best of weekends & thank you for your fidelity!

The fantasy tree.
A new addition to the Zen tree collection.
This is my latest work. One that I have struggled with in the sense that I debated whether or not I should work further on it. I have sometimes made wrong decisions and spoiled projects so this time I let it simmer… And concluded that I loved too much the curves,texture, hue and shapes (that represent in my opinion a perfect abstract composition) to sacrifice it by attempting some kind of modification.
The thickness was produced by heavy painting and extra heavy gel medium I’ve discovered lately & really enjoy working with!

Close ups to follow… This is the continuation of an abstract collection called “the Zen tree collection”
P.s I would like to give a big thank you to Theecograndma.com for helping me out with signing my works, something I wished to do for quite a while but every information I got from good willing followers led me to a standstill.